Emu eggshell is laid down in layers (usually 7) being from dark green on the outside through shades of jade green to white on the inside. Emu eggs are highly attractive when carved.

Emu eggshell is laid down in layers (usually 7) being from dark green on the outside through shades of jade green to white on the inside. Emu eggs are highly attractive when carved.

Emu Egg production is usually from April until the end of September. Females produce about 15 eggs in their first year of lay, but individuals can produce up to 35 emu eggs.

After pairing and choosing a suitable site for the nest, the emu lays her first egg, which is usually the smallest of the clutch. Every species of bird has its own time frame for lying of eggs. It does not necessarily correspond with the size of the bird, and each egg that a bird lays will always have the same pattern, similar to our fingerprints.

When the emu lays her eggs, it s normally in the hours of late afternoon or early morning. She squats on her haunches rather than lying down completely, and then giving a slight push, which hunches her body somewhat, where upon the egg is dropped with a thump to the ground.

This doesn’t normally hurt it, unless dropped on sharp stone, which may puncture the egg. An egg is normally shiny and wet, and will feel slimy to the touch. After a few minutes this slimy layer dries on the egg. 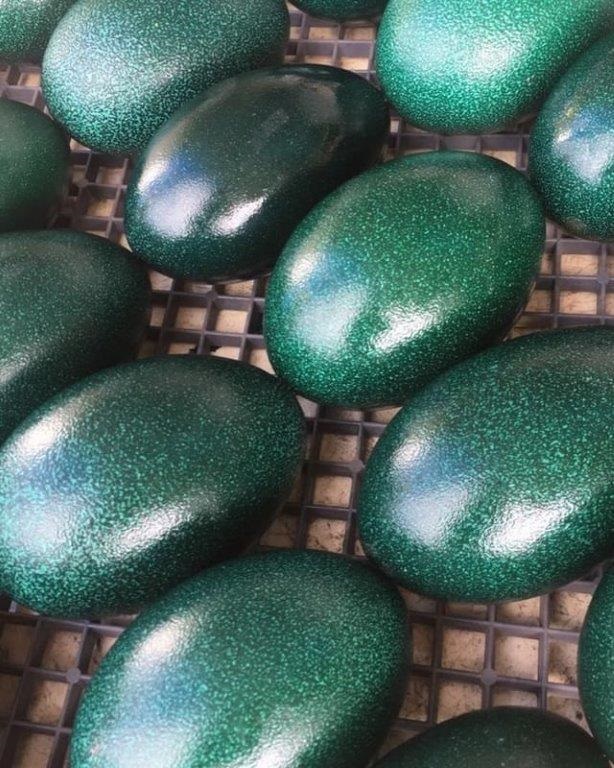 Once laid the emu egg immediately begins to cool as it has just left the warmth of the birds body. Cooling off will contract the egg contents somewhat, and air space will begin to form between the inner and outer shell membranes. The cuticle dries into the egg and fills it against bacteria, and the embryo goes dormant and will remain so, under the right temperature conditions.

The male emu sits on the eggs, hatches and raises his chicks!

The male emu in the wild stores some of the eggs before beginning to incubate them. Initially the male covers the eggs with leaves, twigs or dried grass in order to insulate them. When enough emu eggs have been laid the male becomes “clucks” and begins to incubate by sitting on the eggs. He usually goes into a trance like state, and loses interest in eating and everything else.

The female may go off and find herself another male where she will lay a second clutch of eggs. The male sits on the eggs for up to 56 days without food or water, with a sad look on his face. He will do all the raising of the chicks; the female normally has finished her job once she has laid her eggs.

Growth begins to take place in the small area at the top of the yolk and it does not take long before the embryo becomes recognizable as a chick. A network of blood vessels begins to develop spreading from the embryo out over the yolk. The yolk sac is attached to the chicks gut via the navel. Out of the navel another membrane also grows similar to the placenta of mammals.

The plentiful supply of blood vessels enable it to carry oxygen to the embryo. The air space enlarges and the egg loses weight.

Since the embryo is alive it generates heat, as it grows. This becomes more and more noticeable until a few days from hatching it will feel hot to the touch and remains hot.

Whilst in the egg and in the air sack the chick is able to whistle, we believe this is so the male emu can man over the eggs in a certain way where as the chicks in the air sack are in either the cooler part of the area and able to be hatched without being squashed.

One emu egg is equal to approximately 10 – 12 chicken eggs.

Emu eggs can be eaten, blown, painted, carved, and decorated.

Your cart is empty.